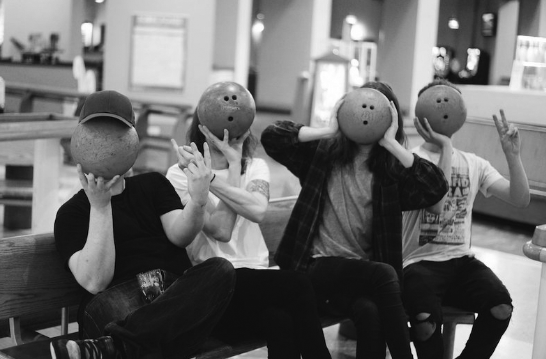 In 1962 they said that four lads from Liverpool “Shook The World.” Well keep forward to 2019 and there’s something entirely different shaking the city of Liverpool.
Step forward OHMNS. Loud, fierce and savage, OHMNS deliver a Garage Punk snarl that sounds truly ferocious! Live at times it’s mayhem. Chaotic scenes on stage. Tough driving beats, piercing guitars, dirty rumbling bass lines and all four band members sharing screaming vocal duties. It’s pure excitement! In 2015, four old school friends formed OHMNS. The band got to work playing gig after gig and quickly established themselves as favourites on the live circuit playing with bands such as The Black Lips, The Gories, No Age and The Parrots. Soon after they released the four track ‘Rice Tapes’ on their own label including live favourites such as ‘Paul is Sure’ and ‘Keshi Heads.’
Gigs soon followed with the likes of The Fall, Fucked Up, Omni and Mark Sultan.
The band then turned the head of Hartley from the legendary band Clinic, who released the self titled 7″ single in 2018 to widespread critical acclaim.

Back in the theatre-like main room, Ohmns offer something more akin to sonic chaos. Having picked up a reputation as one of Liverpool’s most raucous live acts, their heavy-as-lead punk rock is punctuated by mammoth jams, semi-naked freakouts and a couple of onstage revellers, who bounce around the unfazed four-piece. Ohmns live up to their reputation. Fat Whites better watch their backs. THE SKINNY MAGAZINE

A group of artists we really believe in, and that we follow on a long term basis for live, promotion, partnerships’ research.